The present Brdo Castle was built around 1510 in what was then the Duchy of Carniola. It was originally built in the Renaissance style, but has since been frequently remodelled. After the Second World War, the castle served as a summer residence for the then Yugoslav President Tito. Since his death in 1980, the estate has been Slovenian state property. Important international conferences with heads of state and government such as US President George W. Bush have taken place at Brdo Castle.

Due to weathering, moss and algae growth, extensive cleaning and restoration work on the stone surfaces in the exterior of the castle became necessary in 2019. 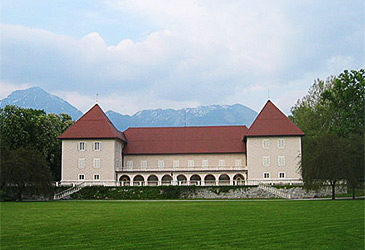